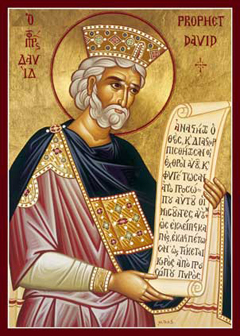 December 29 marks the feast of the royal and holy ancestor of God, King David. David was a tremendous sinner, a murderer and an adulterer. Yet God forgave him. Why? Because of his repentance. And that is how we can be forgiven, too, despite our sins. As scripture says: ‘If we say we have no sin, we deceive ourselves, and the truth is not in us. But if we confess ours sins, He is faithful and just to forgive us our sins, and to cleanse us from all unrighteousness’ (1 John 1, 8-9).

And what joy forgiveness brings! As David himself says (if we may ascribe the psalms to him): ‘Blessed the one whose sin is covered, the one whose iniquity is forgiven’ (Ps 32, 1).

Thus, as St Ambrose exhorts: ‘As we have imitated David in his sin, let us imitate him in his repentance.’ From the sorrow of sin, let us move to the joy of being forgiven!