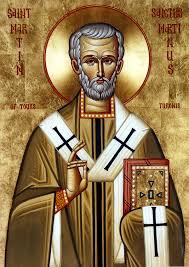 ‘Behold a great priest who in his days pleased God.’ These words of the epistle certainly apply to the saint whose feast we celebrate today, Martin of Tours.

Born in the first part of the fourth century, he was the son of a soldier, and followed his father into that profession, before becoming a hermit and later a bishop. He died November 8, 397, so renowned for the holiness of his life that he is said to be the first person who was not a martyr to have been venerated as a saint.

His fame spread far and wide; as the poet and hymn-writer Venantius Fortunatus put it, ‘Wherever Christ is spoken of, there Martin is honoured’ – and this is certainly true in the west of Europe,  not least in England, where a huge number of churches were dedicated to him – and in Ireland, where, as we know from St Columba’s biographer, Adomnan, mass in his honour was celebrated on Iona.

The best-known story about St Martin is how as a soldier he one day saw a beggar standing cold and shivering in the street. At once, drawing his sword he cut in half the paludamentum, the military cloak that he was wearing, and gave half to the poor man.

That night the Lord appeared to Martin in a vision, wearing the cloak, because whatever we do to the poor we do to Christ, as He teaches us in the Gospel, Matthew 25: Whatsoever you have done to the least of these My brothers and sisters, you have done to Me.’

Sharing is such an easy virtue to practice – even small children can do it. At the other end of the scale, it should be done by the great powers in the world: they have a moral obligation to share the earth’s resources for the benefit of all. And it should be done by us.

St Basil has a famous sermon, in which he speaks these stark and challenging words. The food we horde away in our pantries, he says, is a theft from the hungry; the clothes which fill our closets are stolen from the naked; the shoes we amass are stolen from those who go barefoot.