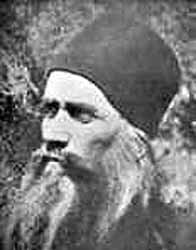 Today in the Orthodox Church we recall St Siluoan the Athonite, who reposed September 24 1938. A Russian, he came to Mount Athos at the age of twenty-seven, where he practiced the spiritual life to a very high degree of perfection. Neither a priest nor a deacon, indeed only barely literate, he nonetheless became a guide sought out by many because of the wisdom which God had given him.

Amongst St Siluoan’s  counsels, this is one of my favourites: Understand two thoughts, and fear them. One says, “You are a saint,” and the other, “You won’t be saved.” Both of these thoughts are from the enemy, and there is no truth in them. But think this way: I am a great sinner, but the Lord is merciful. He loves people very much, and He will forgive my sins.